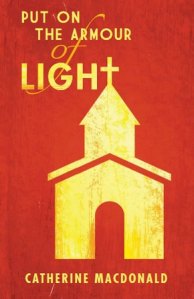 On Nov. 29, Put on the Armour of Light was one year old. I’m using the occasion to talk a bit about the second book in the series, which will take up the story of Charles Lauchlan about a year after we last saw him. The book is as yet untitled but because it’s set in Scotland, and because I have to call it something, I’ve been referring to it as “Scotlandia”. It will get its proper title in due course.

I don’t like to talk much about work in progress—in case there isn’t much progress. But I did want folks to know that there is a second book well on the way. All I can divulge at this point is that it will involve bicycles, picnics, considerable Highland scenery, rather less than optimal Scotch whiskey consumption and Charles and Maggie—not to mention the redoubtable Sergeant Andrew Setter—once again caught in the talons of murder most foul. And I’m not just talking about Scottish weather.

As to when you might be able to read it, I can only quote the Scotch play. “If it were done when tis done, then ‘twer well it were done quickly.” And no, I don’t know what that means either.