I was flapping my gums in a recent post about that golden time when we all used to sit on our front verandas interacting like crazy with our neighbours and in general going all Jane Jacobsy. Like most romantic notions, this one needs to be tempered with reality. David, aforementioned walking urban encyclopedia, pointed out to me that there were some very practical reasons why our Victorian ancestors would choose to sit out at the front of their houses, rather than in the back. Those reasons were: the coal chute, the garbage cans and the outdoor privy.

The older neighbourhoods in Winnipeg were designed with back lanes long before the days when car ownership was common. These lanes accommodated the service wagons that collected garbage, brought coal to your house and periodically dug out the contents of your privy. The Victorians would rather have died than talk about the latter, which is what has made research for this post difficult. In fact they did die of typhoid fever in sufficient numbers that the city finally banned outdoor privies and made sewer connections mandatory for property owners. That finally brought an end to the typhoid epidemics that regularly plagued Winnipeg prior to 1910.

I’ve looked for a photograph of an ordinary back yard c 1900 without success. So, meanwhile, here’s another fantastic veranda. It’s Dalnavert Museum, the Hugh John Macdonald house, now taking on a new lease on life under the management of the Friends of Dalnavert Museum. 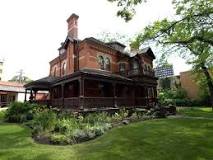