I indulged my nostalgia for the veranda by setting several key scenes in Put on the Armour of Light on the veranda of the Skene house on Balmoral Street.

Something valuable was lost when, after WWII, new suburban houses were built without the large street-facing verandas that had dominated entrances for several generations. When the front veranda became the back deck, we lost a unique and more social space. Front verandas are that neutral place where you can sense the doings of the house, yet not get caught up in them. Or you can view the street without being on the street. In strait-laced Victorian society, some liberties were allowed on the veranda. You would be within eyeshot and earshot of a chaperone, yet be alone with a person of the opposite sex. In the days before air-conditioning, the family could sit out on the veranda in the evening, mother with her mending, father reading the paper by the light of a coal oil lamp, both of them keeping an eye out for their children who would be playing somewhere close by with their friends. Because houses of that era were built close together, you might chat back and forth with your neighbours who would also be sitting out on their verandas. 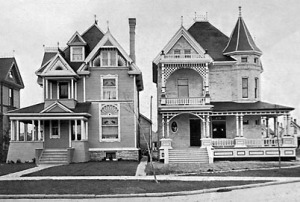 Or, equally fascinating but a little more modest.