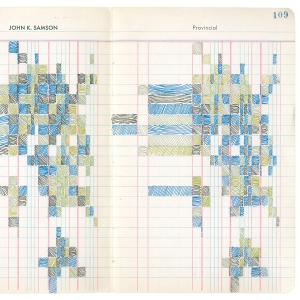 Some people might think that a blog that is essentially about artistic representations of Winnipeg is too tiny a window onto the big world. My answer to that is two and a bit words: John K Samson. His album, Provincial—with its references to cruise night, the old army navy store, an all night restaurant in North Kildonan, the Ninette Sanatorium—is rooted, you might even say stuck, in the geography of Winnipeg and of the highways that radiate outward from or converge on Winnipeg (depending on your point of view). Yet it also contains worlds of feeling that can move you whether you are from Hoboken or Lviv or Chengdu. The line between poetry and song, if there ever was one, disappears with Samson. The songs are beautifully crafted but you need to read them as poems too in order not to miss the clever, quirky, unexpected imagery. Fortunately, that’s easy, because every copy of Provincial comes with a book of the poems. In fact, the package includes a vinyl album, a cd and the volume of poetry. That’s something you’ll miss if you just download the album. And if you haven’t listened to Provincial or any of Samson’s work with the Weakerthans, you’re missing out on something fine.

Here’s Samson singing, “Letter in Icelandic from the Ninette San”. (The Ninette Sanatorium was a hospital for the treatment of tuberculosis patients located in the town of Ninette in southwestern Manitoba.)